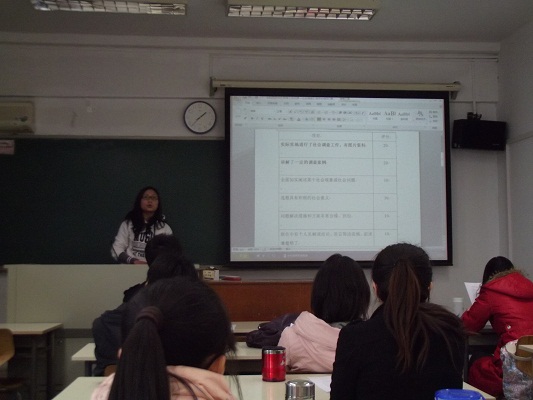 On March 2nd, CRE Ph.D. students switched from on-site social survey to the summarizing stage, as scheduled previously according to the course requirements of Chinese Marxist and the Present Age. A symposium was held at room 604 in the teaching building. Participants were the students from Cold and Arid Regions Environmental and Engineering Research Institute who selected the course.

A large numbers of realistic topics were discussed, for example, either educational and employment issues can be associated with the real-world lives. Some attractive surveys reported are: survey on the employment status of graduates from rural places, survey on the effects of cell phone on teenagers, attitude of the public to the National Matriculation TEST, etc. Most of the students can analyze their investigations objectively, and suggested lots of solutions as well.

Finally, reasonable comments on the content and style of the reports were given by the instructors and the judges. They suggested some report style and gave several valuable advices. Students also discussed with each other and share their particular viewpoints.